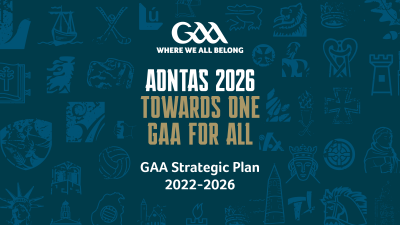 The GAA has today launched a new strategic plan entitled ‘Aontas 2026 – Towards One GAA for All’, to grow and sustain the Association over the next five years.An event held at St Fechins GAA Club in Co Louth was attended by Uachtarán Larry McCarthy and Ard Stiúrthóir Tom Ryan along with representatives of the Association where details of the plan were announc..
Read More 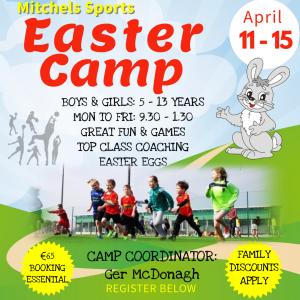 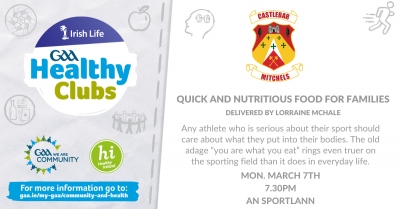 QUICK AND NUTRITIOUS FOOD FOR FAMILIES - TALK NEXT WEEK

Castlebar Mitchels Healthy Club are holding a talk  “QUICK AND NUTRITIOUS FOOD FOR FAMILIES” in An Sportlann next Monday 7th March at 7.30pm, given by Home Economics teacher Lorraine McHale. It will focus on sports nutrition and cooking healthy meals for optimum performance. Any athlete who is serious about their sport should care about what they put into their bodies. T..
Read More 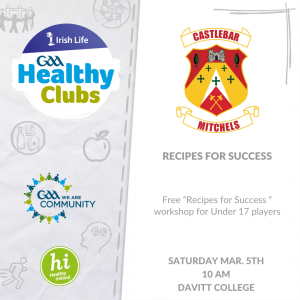 Castlebar Mitchels Healthy Club are running a free “Recipes for Success “ workshop for Under 17 players on Saturday morning 5th March at 10.00am in Davitt College, Castlebar.       Maximum number 20.  It will focus on sports nutrition and cooking healthy meals for optimum performance. It involves a practical cookery class. Each player will receive a Toolkit with a s..
Read More 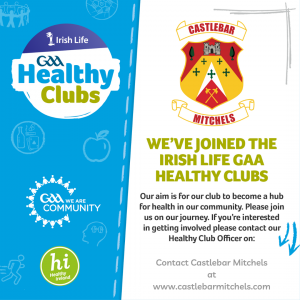 The Healthy Club project aims to help GAA clubs explore how they support the holistic health of their members and the communities they serve. GAA clubs already contribute to the health and wellbeing of their members by providing opportunities to develop their physical, social, emotional, and psychological health.The project aims to help GAA clubs identify what they are already doing well, identify..
Read More 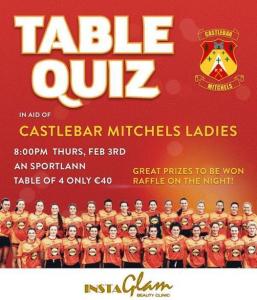 Ahead of the upcoming Intermediate Club All Ireland final, a table quiz fundraiser has been organised for An Sportlann,  Thursday 3rd February 2022. Kicking off at 8 pm, be sure to gather a few friends and come enter a team. Only €40 for a team of 4.  Great prizes and plenty of fun on the night.
Read More 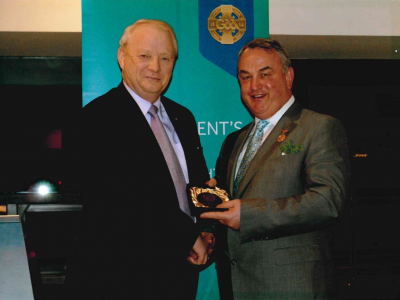 John was a tireless community worker, who gave unselfishly of his time and talents to a wide range of organisations which included, Castlebar Mitchels GAA Club - Bord na nÓgJohn was a mainstay of the club in the 80’s, 90’s & 00’s, where he was involved in various roles in overseeing the revival of football structures within the club along with other club figures. ..
Read More 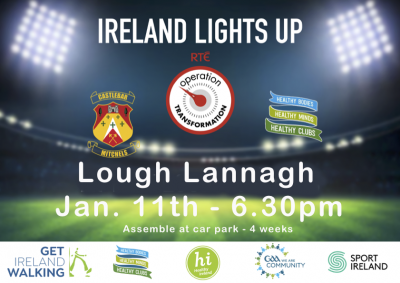 The GAA’s popular “Ireland Lights Up” walking initiative returns in January 2022 in partnership with RTE’s “Operation Transformation”Castlebar Mitchels GAA Club are organising walks this month in conjunction with RTE.Walks around the lit-up paths of Lough Lannagh, Castlebar, will start on Tuesday evening 11th January at 6.30pm, assembling at Lough Lannagh c..
Read More 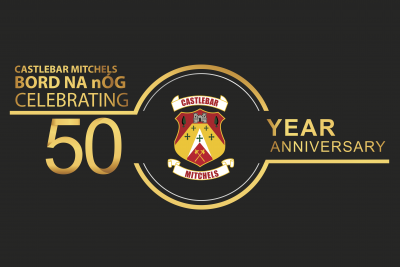 Sunday, December 19th was the final day of the six-week, fun fitness programme organised by the U-9 and U-11 coaches.  It was a huge success and all 81 participants really enjoyed it. The aim of the sessions was to support the boys maintain and improve their fitness and agility levels in the off season while keeping in touch and hanging out with their friends. The organisers want to thank e..
Read More 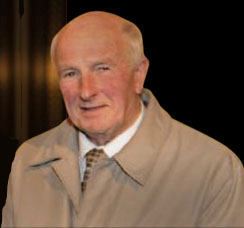 An enduring story from the football career of Patsy Horkan who died recently:Castlebar Mitchels were the dominant football force in Mayo in the fifties, and Patsy Horkan, one of the team’s leading players, was asked with three other Mitchels members to pack a team which had reached the final of the Limerick junior football championship.Patsy, Nace O’Dowd, a Sligo man playing with the M..
Read More
1 2 3 4 5 6 7 8 9 . . Next Last
This site uses cookies: Find out more.
Scroll to top